The first version of the viral fidget spinner we see today was thought up by Scott McCoskery in 2013 under his company, MD Engineering LLC. He called his fidget spinner Torqbar – a spinner targeted at high-end, luxury gadget lovers.  Each laboriously crafted in his Washington base with a price tag of $129-259 depending on style and finish.

Scott came up with the idea in 2013, created the product in 2014 and made his first sales in 2015. To keep up with growing demand he started a GoFundMe to increase production. The GoFundMe failed to reach it’s $15,000 goal, raising just $4,000 with 27 backers. Scott partnered with a friend and continued to sell the product as fast as his production setup allowed.

As the buzz around Torqbar grew it brought attention from the Chinese copycat market. In 2016 variations of Scott’s product started appearing on Chinese import websites. The same product but instead of being hand made, luxury and metal, they were low end and plastic with small adjustments to the rotating design. The plastic version could be produced for a fraction of the cost and at scale.  Fidget spinners were now no longer exclusively for niche gadget lovers, they became mass market and affordable. Sadly Scott doesn’t hold a patent for the design and currently has no power to collect royalties from all the Chinese sales of his invention.

Fidget spinners failed to go viral in 2015 and made it in 2017. Why did it take 2 years to find the right formula for success?

In 2015 the only supplier was Scott and he already couldn’t keep up with demand so this no doubt slowed growth. Fidget spinners were available on import websites like Alibaba throughout 2016 for under $1 a piece (targeted to Autism/ADHD groups) and yet they still didn’t go viral until April 2017.

What was the catalyst that sparked the viral 2017 trend?

Unlike most trending products throughout history, fidget spinners didn’t go viral from a tv ad, offline promotion or a mass store pickup. The viral effect was down to new advancements in the eCommerce industry, easing the costs and path to market for any product considerably from importing, to sales, to marketing. This ease of access has introduced a lot of marketers to the eCommerce world this year, ready to take hold of the latest products and put their marketing brains to work.

Without Alibaba, Shopify and Facebook this viral trend wouldn’t have happened.

Recent advancements in the eCommerce industry have allowed small business owners to import and sell products from China cheaper and faster than ever before, with an extremely low overhead.  You can import and test products from Alibaba in record time, list them on a Shopify store in minutes and then post them to Facebook with specific targeting and a viral angle to promote shares – overall, a process that once took months and hundreds of thousands in R&D now takes just days and can be accomplished on a budget of well under a thousand dollars – the ease of setup is creating many young millionaires.

Established gadget & toy stores missed out on the bulk of the fidget spinner trend because the majority of the sales were being made in online stores with this low-overhead setup. When the more established companies discovered what was going on it was almost too late for them to start the import process and capitalise on the trend the smaller eCommerce stores had started.

Who exactly was responsible for the viral growth of fidget spinners?

The intelligence software we run here at TrendingProducts discovers product trends based on link sharing patterns – we picked up on the growth of Fidget Spinners at the start of January 2017. A full 4 months before the peak of the viral trend.

The first link we noticed a lot of activity from was from a company called Different, Not Less on January 22nd, 2017. Different, Not Less specialise in selling products for children and adults with Autism & Special Needs. We highly recommend you check out their Shopify store and thank them for the part they played in bringing fidget spinners to light.

You can see they’re selling the product for $12.96 + shipping. Already that’s an x12 markup on the $1 cost price from most Alibaba suppliers. Can you see why it’s such an attractive product?

Further analysis turned up this post from them sharing the product on January 11th, 2017.

Full marks to them for being one of the first product sourcers. However, in terms of marketing they leave a lot to be desired. They made no effort on the video, using the one supplied by the Alibaba wholesaler and in terms of audience targeting there was so much more potential outside of the ADHD /Autism space.

Different, Not Less had just 2,000 shares, that’s not exactly viral, is it?

It’s not and that’s because of unoptimized marketing – so let’s fast forward to January 28th 2017 when another eCommerce store with a little more marketing savvy, started to catch wind of the high margins (2 weeks after the Different, Not Less post). They created a Shopify store and changed the store branding to reflect a name they gave the fidget spinners imported from Alibaba. They called the product ‘Fidgetly’ in their marketing. When you combine a great product with great marketing, that’s when a product starts to trend.

Fidgetly racked up 50,000 shares in February, that’s more like it..

Fidgetly created a brand around an unbranded, unpatented product and sold it well – rather genius in our opinion. After analysis of all Fidgetly’s posts, we calculated that they racked up well over 50,000 shares and tens of millions of views on the videos they posted on social media.

Fidgetly ticked every marketing checkbox – identify the problem and present the solution in a very engaging way. Text in the video is much more effective than audio to attract users who only catch glimpses of the viral posts.

That said, Fidgetly is just one of hundreds of stores selling the fidget spinner in creative and unique ways. Fidgetly was the first we detected that really helped in making the trend go viral – Congratulations Fidgetly –  you were a key player in starting this global trend!

Looking at the data, we predict Fidgetly had around 10 million points of engagement with users on their campaigns. Assuming a 3% conversion rate and a conservative estimate of 1 product purchase per user, it would put their profits in the $2-3 million range in just a couple of months. This is a very low end estimate, with a viral product like this conversion rates are much higher and you will see families buying 4 or more at once. The seeds Fidgetly and similar stores laid in January and February caused a chain reaction in friend groups once the products started arriving in March ~ everyone wanted one and in the space of a short month, fidget spinners went viral.

The future of trending products will follow a similar story, performance-based marketing on platforms like Facebook allow for micro-level targeting and testing of various products at a scale never seen before (even before the sellers have them in most cases – aka dropshipping). All it takes is a good product and an engaging angle. The good news is, we can show you most of the angles trending products are using so you can learn from them.

Our intelligence software shows you new trending products like the fidget spinner in real-time. You can use this data to find niche relevant products months before your competitors realise they exist.

We are working with product buying teams and eCommerce businesses, you can join our waiting list or apply for early access here.

Research Notes: A common misconception is that Catherine Hettinger is the original inventor as she had a patent approved in 1997 for a spinning toy – upon careful examination of the patent you can see this was a very different finger spinning toy to what we see today. Torqbar is the first company to come up with the ‘between the fingers’ product we see trending now.

Originally sold on Alibaba under names like Tri-Spinner, EDC Spinner, Fidget toy and marketed towards to ADHD/Autism community throughout 2016.

Scott McCoskery has a patent pending for his design but most experts believe by the time it’s processed the craze will be over and he’ll miss out on all the royalties.

Team Research
Trending Products is the only product research solution that backs the trends we show with real data. We scan billions of data points each day to show you unique new trending products daily. Our industry-first features - Strength Metrics, Store Reports, SmartMatch, AutoContact and Trending Feeds will help you take your product research to a new level. 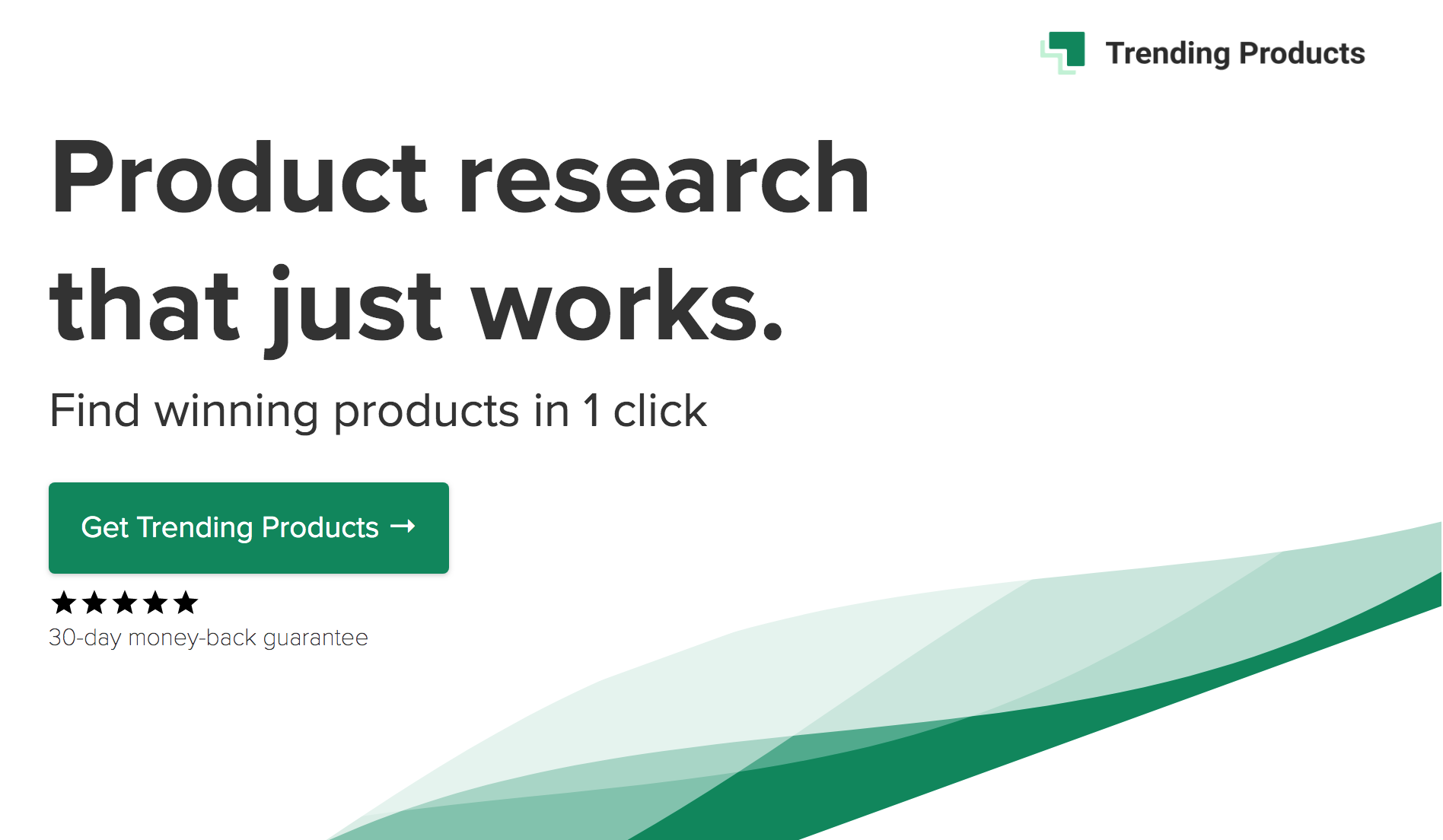